Today we are celebrating Ugadi, the Telugu New Year Day, which is the first festival of our Telugu calendar and the first big festival that comes after Sankranti.

Our Andhra festival is known by different names in different states of India like â€œGudi Padwaâ€ in Maharastra and â€œUgadiâ€ in Andhra Pradesh and Karnataka. Whatever the name this festival takes in different regions, it heralds the dawn of Vasanth Rutu (Spring Season), which is considered the first season of the year (Chaitra Maasam). Ugadi to the Telugu speaking people marks a beginning of a new year in which nature is in full bloom, symbolizing regeneration and celebrating the seasonâ€™s freshness.

With the coming of Ugadi, mango season is in full swing with fresh green mangoes flooding the rythu bazaars, garlands of marigold, roses, kanakaambaram, chamanti, naturally perfumed jasmine flowers (mallepuulu) which are in full bloom adorn the deities in temples and yes, you find most of our Andhra womenâ€™s braids are adorned with clusters of mallepuulu (jasmine flowers). The doorways of our homes are adorned with mango leaves which signifies prosperity and general well-being.

But the most unique and significant tradition of Ugadi is beginning the new year with savoring a unique flavored pachadi (chutney) that epitomizes the spirit of Ugadi called “Ugadi Pachadi”,with sweet, sour, pungent and bitter tastes (shadhruchulu or six tastes). This chutney or sauce is a symbolic reminder of the myriad facets of life in a sense prepares us for the year ahead. Of course, other than the special pachadi we also prepare special foods with the use of raw mango like papppu maamidikaaya, maamidi pulihora, maamidi kobari pachadi,pulihora,bobattulu, payasam and garellu.

Ugadi Pachadi is a special preparation prepared in every Andhra home on Telugu New Yearâ€™s day. Its made with fresh tamarind, jaggery(panela), fresh mangoes and neem flowers (margosa). One can add sugarcane, coconut and bananas also. The sweetness of jaggery, the sourness of tamarind, the bitterness of neemflower and the pungent flavor of the green mango skin, spice of the chilli powder ,raw tender mangoâ€™s taste and lastly salt form the shadhruchulu or six tastes of the saul.

Each home has its own version of preparing the ugadi pachadi but the main ingredients (reflecting all the six flavors) are as specified above.

The myriad rich taste of this delicacy tickles and lingers on our tongue for a long time leaving a medley of flavors. The flavors of the Ugadi Pachadi signifies that the mixture of bitter margosa flowers and sweet jaggery reflect the myriad facets of life, both joy and sorrow and prepares one to face both good and bad in the year to come. During this season we find people eating neem leaves and flowers at the onset of Vasantha Ruthu and through out the spring season as its a counter measure for kapha dosha individuals (kapha dosha increases around this period).Ugadi Pachadi is a healthy low calorie pachadi where the Neem flowers, new tamarind, jaggery and fresh raw mangoes contain nutrients that cleanse the system and act as prophylactics (prevention of illness or disease).

Ugadi Subhakankshulu! Wishing you all a very happy Ugadi and a great year ahead! 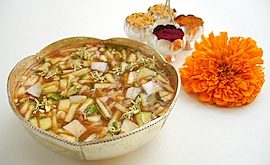