If I’ve been MIA, its because I am delighting myself with my 22 month old nephew (visiting India) and reliving Nehal’s toddlerhood days. Busy fun days. 🙂 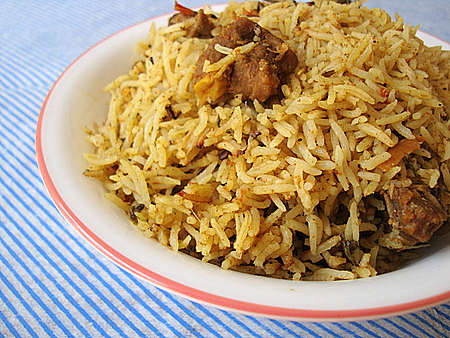 A quick special one pot meal for one of those busy days is this particular biryani. Simple preparation, not at all complicated and can be made in less than an hour. I would frown upon any biryani recipe that didn’t call for ‘dum’. Even more so on ‘pressure cooker’ biryani. I would refuse to try any other method thinking it was blasphemous. How wrong I was? This particular biryani which is cooked in a pressure cooker is not an authentic style Hyderabadi biryani. It tastes good the day you prepare it and even better the next day. 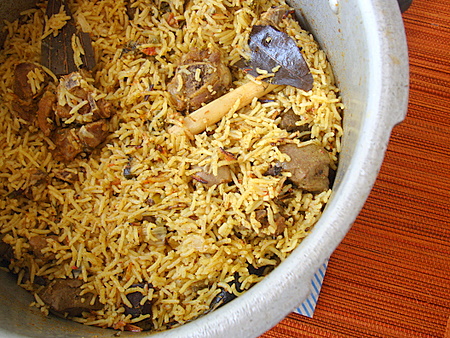 juice of half lemon

1 Marinate the mutton with the ingredients called for ‘marinade’. Keep aside for 20 mts. While the mutton is marinating, work on the rest of the preparation.

2 Heat 1 tbsp oil + 2 tbsps ghee in a pressure cooker vessel, add the bay leaves, cloves, cinnamon, marathi mogga, elaichi and saute for a few secs. Add sliced onions, saute for 7-8 mts. Add the ginger garlic paste and coriander-pudina leaves and saute further for another 5 mts.
2 Add turmeric pwd and red chilli pwd, saute for another 2 mts. Add the chopped tomatoes and saute for 3-4 mts. Add the marinated mutton along with 1 cup of water and bring to a boil. Pressure cook mutton till it is almost cooked, upto 3 whistles. Turn off heat and cool. Remove lid and you will find that it will appear like a thick gravy. If the gravy appears very watery, cook further without lid till it forms a thick gravy.
3 Turn on the heat again, add 3 cups of water and 1 cup of thick buttermilk. Add the biryani masala and nutmeg pwd. Add salt (remember we have added 1/2 tsp of salt to the mutton marinade, so add salt accordingly). Add the drained basmati rice and combine. Pressure cook upto 2 whistles and turn off heat. Once pressure is off, remove lid, pour a tbsp of ghee and combine carefully. Serve hot with raita. 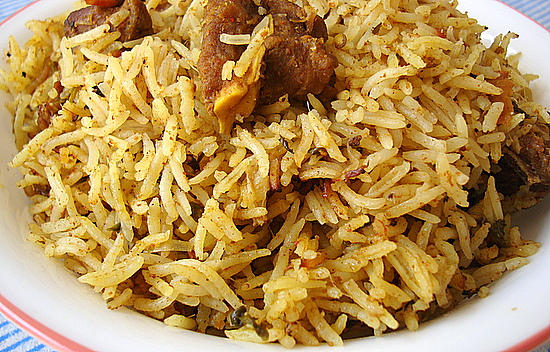 You can alternately cook the biryani in a rice cooker. After the mutton is cooked in a pressure cooker, remove the contents to a rice cooker and follow the rest of the above procedure. You can follow the same recipe using chicken instead of mutton. If using chicken, add 1/2 cup water instead of 1 cup and cook up to 2 whistles while preparing the gravy otherwise the chicken will become mushy.

Update on Taste of India: TOI is going through a testing phase and is not up officially. We are testing few feeds at a time. Once we are through with the testing, I will announce the re-launch date of TOI.