Did you know that the humble, shriveled black pepper corn has a great history, status and a glorious past behind it? During its long and fascinating history, black pepper has often been more valuable than gold or precious stones and trade in pepper has been an extraordinarily influential factor in ancient history. When Barbara of Tigers & Strawberries announced the theme “Ancient Spices” for her food event “The Spice is Right”, the first thought that came to my mind were Sesame Seeds and Black Pepper Corns. Since I had already blogged about sesame seeds in one of my earlier posts “Nuvvulu Annam”(sesame flavored rice), I decided to blog about Black Pepper which is one of the most exotic ancient spice of India after saffron and is known to be the King of all spices. 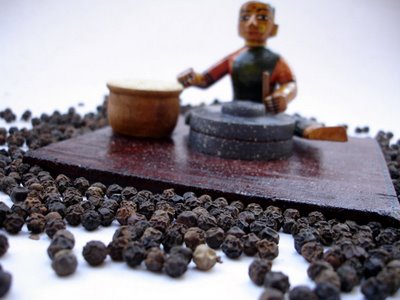 Black Pepper, whose name is derived from the Sanskrit word Pippali and Latin name Piper Nigrum meaning pepper black, is native to Malabar, the Western Coast of South India(Kerala). Black Pepper was a valuable spice during ancient times and was used as a currency to trade between east and west. It’s been said that no other spice has had a greater effect on world history than pepper. The term â€˜peppercorn rentâ€™ actually came from rent which was paid in the form of pepper during the middle ages and that often a manâ€™s wealth was measured by his accumulation of pepper. So high was its value that during ancient times it was used as a currency to pay taxes and there are stories of how 3000 pounds worth of pepper was paid as ransom/tribute when the Germanic tribe or Goths laid siege to Rome, soldiers being paid in pepper for a successful campaign, dowries of pepper given and it was also used as a sacred offering. Read more about the fascinating history of black pepper and how to select, store and tips on cooking with pepper. Ancient Chinese and Sanskrit texts dating to more than 3000 years ago have mentioned about black pepper with Ayurvedic nutrition and Chinese medicine advocating the importance of black pepper as an important spice with powerful healing properties and used in treatment of ailments of stomach and throat. Its also considered to have anti-aging properties, good digestive and a detoxifier too. One of the best home remedies for cold and flu is drinking tea made of pepper corns and ginger. Aromatheraphy oil of pepper is used to clear the head, great for massaging aching muscles and for treating poor circulation.

This exotic spice with a sharp, pungent woody aroma and flavor when cooked for too long, loses its flavor and aroma, so adding it towards the end of the cooking will help preserve its flavor. To bring out the sharp flavor of black pepper, I prepared Miriyala Annam or Pepper Flavored Rice with pepper being the main ingredient and curry leaves and seasame seeds were used to offset the heat of black pepper.Hints of the aromatic flavor of curry leaves, mild nutty taste of seasame seeds and the sharp flavor of pepper blended into the rice giving it an irresistable authentic flavor. 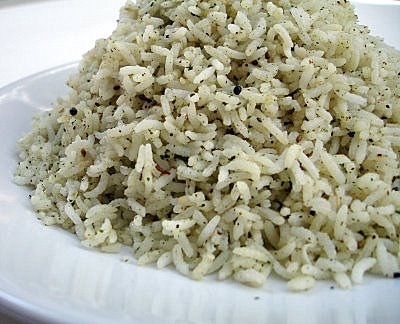 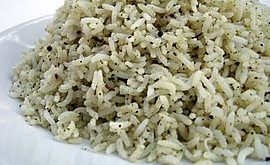