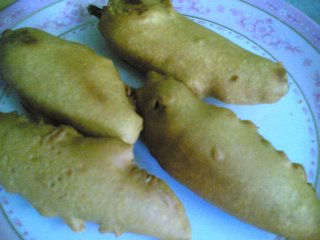 Mirchi Bajji is green chilli stuffed with potato filling, dipped in chickpea flour (besan, senaga pindi) batter and deep fried in oil. Mirchi Bhajis are a popular Indian street food snack and often served as evening snack with a cup of tea. Mirchi Bajji make for a great treat during the monsoon season. One can use different kinds of stuffing for the peppers.

Today I have used a potato based filling that is mostly used as a stuffing in North Indian Mirchi Bajjis. I have used banana peppers which are less spicy than the usual Indian green chillis. You can use any kind of green chillis. 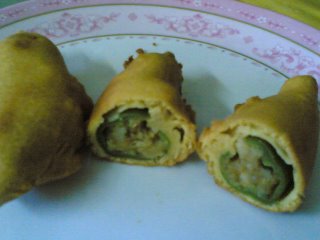 Wash and dry the green peppers. Take a pepper, make a slit lengthwise in the middle, keeping the ends intact. Scoop out the seeds with a knife or spoon leaving the insides clean for the stuffing. 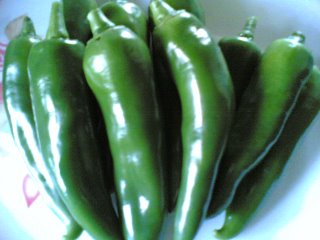 Prepare the batter with 1 cup of gram flour, 1/4 cup of rice flour, pinch of cooking soda, salt and 1 cup of water.The batter should be like a dosa/pancake batter consistency. Mix well and keep aside. 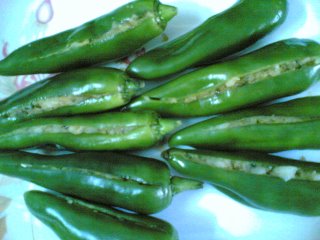 Dip one by one into the batter coating them well on all sides and drop them gently into hot oil. 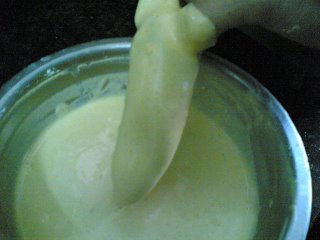 Deep fry until golden, turning constantly. Deep fry 2-3 bajjis at a time. Drain the oil from the bajjis and remove them on absorbent paper. 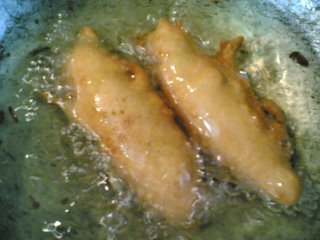