When the ingredient for JFI- January (Coconut) was announced, I knew which recipe I was going to blog. One of the most treasured fruits of the Gods is the coconut so revered to us, Hindus, symbolizing divine consciousness and forms an integral part of Hindu religious ceremonies, from birth to death. The humble, tender loving, versatile coconut is our offering to the Gods, its white flesh eaten as “prasadam” and is the super food to us, South Indians.

There are innumerable traditional recipes prepared with it and by far the most simple and classic recipe is kobbari pachadi or coconut chutney in all its variations. There are certain pachadis or chutneys that are so simple, which can be prepared at a moment’s notice and yet taste divine. Coriander coconut chutney, is one such classic example of an irresistable chutney that is easy to prepare, nutritious and flavorful. A treasured recipe like kothimira kobbari pachadi can give even the most exotic culinary creations a run for its money.

Coriander coconut chutney, is a variation to the traditional coconut chutney, that has a sweet-nutty flavor due to the coconut, coriander and peanuts and the green chillis balances the flavors by giving it a hint of spice. All you need to do is saute the greens and chillis, grind them along with fresh coconut and roasted peanuts and infuse with a seasoning of mustard seeds and fresh curry leaves giving it a fragrant touch. 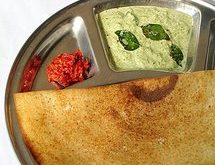