With summer here, its barbeque time..:). I bought a new traditional earthern cooking stove a couple of days ago, called “Kumpati” in Telugu, where charcoal and firewood is used as a medium to cook food and is a popular stove with our rural folks. Kumpati, to us, serves as our “charcoal barbaque” and used often during summers to prepare chicken tikka, tandoori chicken and paneer tikkas. Its not like a typical tandoor but can be used as one and does serve the purpose of a tandoor to a certain extent. Kumpati basically uses “charcoal” as a cooking medium and the intense heat created by the hot coal cooks the food or meat very quickly giving it a crisp exterior and a soft and juicy interior and serves as a homestyle tandoor.

This cooking stove made of clay, has a hole in the front to feed the fire and holes on the top which act as burners. We can cook food directly over the coal embers or place a cooking vessel or pan over the hot coals to cook the food. Since its made of clay it holds in the heat and the food is cooked quickly. This morning when we went for our walk along the beach road, we found some fishermen hauling their nets with a fresh catch of fish. We bought some fresh white pomfrets and I cleaned and marinated them in the morning keeping in mind that we could have a barbaque dinner later in the evening. Satish is a very willing and enthusiastic helper especially with barbaques. He helped light up the coals and got the “kumpati” ready to cook the fish in a jiffy..:)

Wash, clean and dry the fish. Make slits on the fish and marinate it in salt and lime juice for 10 minutes.Meanwhile mix together ginger-garlic paste, turmeric pwd, chilli pwd, coriander pwd and cumin pwd and apply this paste to each of the fish and keep aside for atleast 2-3 hours. You can adjust the spiceness of the marinade according to your choice. I marinated the fish for around 10 hours and refrigerated it. Remember fish or meat marinated over a longer period tastes best as it absorbs the flavors well. 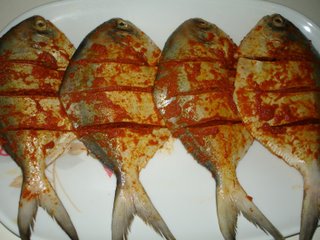 Half an hour before you actually want to eat your dinner, get your kumpati (stove) up and ready by lighting up the charcoal and you should have red hot burning embers of coal like shown in the picture.

Let it cook for 3-4 minutes and then turn the fish on the other side and let it cook for another 3-4 minutes or till golden brown. The real secret to grilling these pomfrets is to not overcook them. Watch closely as you cook the fish …grill hot and fast and take it off the heat as soon as you can.

You have a perfectly cooked moist fish with a mellow smoky flavor ready to be devoured. Serve hot with slices of lemon wedges, salad and chutney.

Note:T his fish tastes best when cooked in a tandoor or on a charcoal barbecue or kumpati. However if these methods of cooking aren’t available then use a grill or bake in the oven.

The spices used in the marination for cooking the pomfret differs region wise and the marinade for this particular fish is one which is popular in our home. I use different marinades using yogurt, garam masala and other spices each time I cook fish.

Grilling/roasting over charcoal heat or tandoori cooking calls for very little fat or oil and the smoky flavor enhances the taste of the food cooked. So if you want to cook some low calorie foods, investing in a grill or home tandoor does make sense. So all you weight watchers out there, hereâ€™s a very simple, low calorie, healthy, flavorful seafood Indian appetizer (cooked with minimal fat) that you will find hard to resist..:).