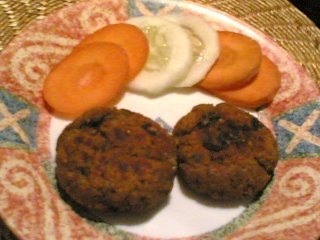 Hyderabad (capital of Andhra Pradesh) and Lucknow (capital of Uttar Pradesh) are the two cities in India where the “kebab” evolved. When and Who introduced the ‘kebab’ to India is another story which requires a separate post by itself..so let me reserve that for later.

Lucknow is famous for its kebabs and you will find the great great grandsons of bawarchis(Chefs) to the Nawabs(Kings) carry on the culinary tradition of their forefathers in their dhabas till today. Lucknowâ€™s richly flavoured Avadh cuisine is specially known for the quality and quantity of spices used in cooking meat dishes.Murg tikka,fish tikka,paneer kebab,seekh kebab,kacche keeme ki kebab,kalmi kebab and tangiri kebab to name a few, are the famous Lucknowi mouthwatering array of specialities.

Hyderabad,our capital city,is the home of the Muslim Nawabs(rulers) and is famous for itâ€™s Dum Biriyani,simply irresistable grilled kebabs, kurmas and the famous Shikampur Kebab (mutton mince cooked with cumin,cloves and cinnamon and bengal gram lentil and stuffed with cottage cheese,mint,onions and green chillies) and gently grilled on a griddle or tawa with pure ghee.Shikampur means â€˜belly-fullâ€™ referring to the stuffing in the centre of the kebab.The famous Shammi Kebab of Lucknow is same as Shikampur Kebab without the stuffing.

500 gms kheema (minced meat)
1/4 cup of Bengal gram lentil(soaked in water for 1/2 hr)
10 cloves garlic
1 tsp cumin seeds
5 pods green cardamom
2 sticks cinnamon
5 cloves
1/4 tsp turmeric pwd
1 tsp red chilli pwd
2 tbsp oil/ghee(clarified butter)
1 1/2 cup water
Mix all the above ingredients and bring to a boil and then bring to medium heat for 2 mts before reducing to low heat until all the water evaporates and the meat and dal is cooked.Stir occassionally to prevent burning.
Then add salt and blend in a mixie and knead it like a dough.Shape into round pattis.

Flatten the pattis and put a tbsp of the filling in the center and reshape into a patti.Refridgerate for 20-25 mts. 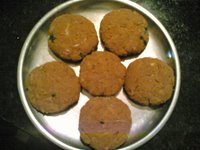 Pre-heat a griddle adding 2 tbsps of oil/ghee and shallow fry 3 kebabs at a time.Let them cook on low heat to medium heat.Flip over and brown both sides till golden brown.
Serve with salad,onion rings and lemon wedges.

Note:The authentic recipe calls for chunks of meat which is cooked in spices and pounded in a stone mortar.I have used minced meat out of sheer convenience..:)