Sailaja invited me to write about Traditional Maharashtrian Snacks and Sweets. It sure was a very delectable invitation which instantly took me down memory lane. Letâ€™s go to the kitchens of my family & friends and discover some yummy delights together.

Pohe is the most common breakfast and it is paired with almost all the vegetables & sprouts like onions, potatoes (batata pohe), tindora/Tondli, eggplant/brinjal, corn, green peas, kala vatana or whimsical creation like soybean pohe. Every vegetable adds a unique flavor to the resulting pohe. I think the most outrageously different pohe would be the one paired with shrimp or prawns (fresh or dry). It is considered a specialty of a certain community in Maharashtra. And I have had a privilege of tasting them at a friend’s place. However the most important pohe is definitely kande pohe. They are synonymous with the wedding arrangements at the bride’s house. “Kaande Pohe program kadhi?” is a loaded question, though it just appears as simple as â€œwhen are you going to have Kande pohe?â€. What it really means is if the groom’s family has come over “to see” the bride yet or not?:-D I think, it has the same association with pre-wedding rituals like â€œSoji & Bajjiâ€ in other parts of â€“ probably South â€“ India.

While thick pohe dominate all the above preparation, thin pohes are tempered and served as Dadpe pohe.

Tikhtameethacha Saanja is Maharashtrian version of Upma and with turmeric powder, it looks bright yellow. Sometimes Shira (rawa kesari or sooji ka Halwa) is also served for breakfast. Many homes serve it along with a dollop of spicy pickle just to get a zing while eating cloyingly sweet shira.

Leftovers like rice or chapatis are cleverly tempered and made into classics phodnichi poli or phodnicha bhaat. They both taste simply delicious.

There are also Maharashtrian versions of dosas like Amboli, Ghavne, Dhirde.

2) Crispies with meal (“Tondilaavne”)
An elaborate Maharashtrian meal comprises some crispies like Kothimbeer vadi, Alu vadi, Surlichya Vadya, bhuji. Suralichya Vadya and ALuvadi find their twins as Khandvi and Patra respectively in the neighboring state of Gujarat. Kothimbeer Vadi is a simple cilantro based steamed dumpling which is shallow or deep fried and served.

3) Teatime Munchies (“Chahabarobar”)
Snacks that are served along with afternoon tea are generally batatavada – which along with paav is almost synonymous with Mumbai and is hailed as Mumbai’s answer to the burger, Misal, Dahi Misal, Thalipeeth. Misal has a mixture of sprouts where as Thalipeeth has a complex mixture of multiple grains and legumes. Thalipeeth Bhajni is generally available in the Maharashtrian pantries to make impromptu Thalipeeth. Served with homemade white butter (LoNi) and tea, it is really a gastronomic delight. Most of the vegetables can be dipped in chickpea batter to make delicious bhujis but most common and beloved are â€œKaanda Bhujiâ€ or onion pakodas which are especially loved during the monsoons. Due to their crooked shapes resembling crabs, they go by a quaint name of â€œKhekda (crabs) Bhujiâ€ though it does not have any crabmeat!

5) Dry Snacks (“Suka Khau”)
Grandmothers and mothers (or now shopkeepers!) patiently make the dry snacks for the hungry, homebound kids. These snacks are dry and are kept in the airtight containers. The most common items are Bhajnichi chakli, Bhadang, Chiwda, Shankarpali, Bhakarvadi, Ladoo, Shev. 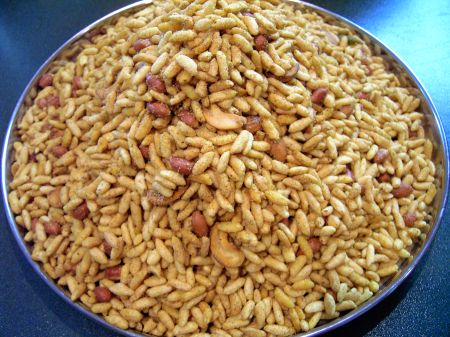 Method
1. In a bowl, mix oil with all the ingredients till coriander-cumin powder.
2. Add puffed rice and mix so the masala coats the puffed rice.
3. Heat 1/4 cup oil for tempering
4. Add curry leaves, turmeric powder and peanuts
5. As the peanuts appear well roasted, switch off the gas.
6. Add puffed rice mixture.
7. Mix well.
8. Let it cool down.
9. Store in an airtight container.

Note
1. The measurement of puffed rice is by weight.
2. According to â€œRuchiraâ€ by Mrs. Kamalabai Ogale, this bhadang goes by the name Bhadang from Sangli (â€œSangli che Bhadangâ€). I am from Mumbai. I am not familiar with the authentic taste of the bhadang from Sangli. So I do not know how close this recipe is to the original Sangli Bhadang but the only thing I can vouch for is its superb taste.

To conclude my guest post, kuchh meetha ho jaaye?:-) I have divided the Maharashtrian sweets in the following categories –

2) Yogurt based sweets
Shrikhand and Amrakhand are two most popular Maharshtrian sweets. Shrikhand is generally made in many households on the Gudhi Padva day which marks the Maharashtrian New year. When you mix mango pulp with Shrikhand you get delectable Amrakhand – a must have during the summer which also marks the mango season.

3) Steamed
Steamed delicacies are Ukadiche Modak & Kharvas. Modak is considered Lord Ganesha’s favorite food and hence is made on the Ganesh Chaturthi day. Kharvas is a steamed pudding made from bovine colostrum milk.

5) Deep Fried Sweets
Anarasay, Chirote, Gharge (pumpkin puris), Karanjya/Ghughra or kaanavle are deep fried delicacies which are generally prepared during Diwali time. Paakatalya purya is another deep fried sweet which is generally made when there is leftover sugar syrup from Gulabjamuns.

6) Laadoos
Rava ladoo, Besan Ladoo, & Rava Besan Ladoo are the most popular ladoos made in Maharashtrian homes. Til ladoo is made for Makar Sankranti where as some other delicacies like Methi ladoo, Dinkache ladoo and ALeevache (flax seeds) Ladoo are made for the nursing mothers.

8) Fruity Treats
The most ubiquitous sweet during the summer months is undoubtedly Aamras (ripe mango pulp). Kelyache Shikran used to be my momâ€™s fallback plan when we kids refused to eat the â€œboringâ€ bhaji. 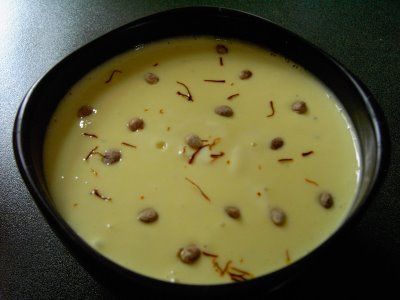 Method
1. Pour the yogurt in a muslin cloth and tie a knot
2. Keep aside for 6 hours so the whey from the yogurt is drained.
3. The yogurt cheese obtained in the cloth is called â€œChakkaâ€.
4. It will be about 1 cup chakka. Mix sugar. Pass the mixture through a food mill to make sure that the sugar is nicely incorporated.
5. Now add cardamom powder, nutmeg powder,
6. Take saffron in a spoon and keep on a flame for few seconds. Dissolve in warm milk.
7. Add to the yogurt mixture,
8. Garnish with charoli nuts.
Note
1. Adjust sugar per your taste.
**************************************************************************
A while back, I read one statement about the diversity of India. It was said, that you can make one true statement about India. While that statement holds true, a completely opposite statement may also equally hold true. Please note that it is impossible to generalize anything about India or any of her states. There are always going to be exceptions. Each family, each home has their own unique way of preparing food and celebrating love. As the families fervently follow the old traditions, they embrace the new ones thus creating new traditions of their own which vary from home to home. This article was my humble attempt to celebrate the vast diversity and delicious food heritage of India. I thank Sailaja for giving me this opportunity.